In a previous article segreation mechanisms were treated. This article deals with the aspects specifically related to storage and flow in the silo. 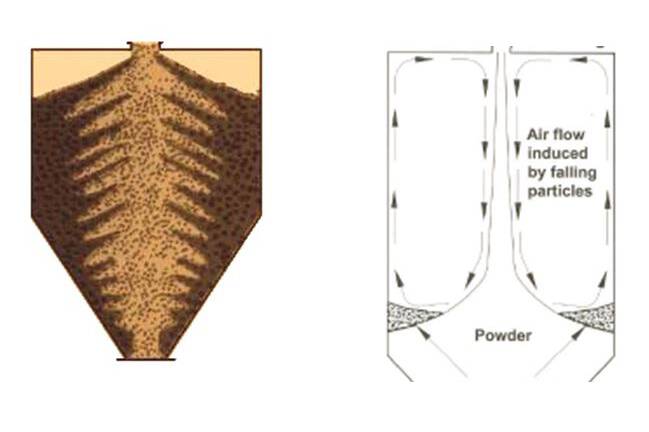 As mentioned in the previous article, segregation (de-mixing) is a result of the difference in properties of the different components or fractions in a mixture. Segregation can be caused by various mechanisms and occur at different places in the production process.
A well-known problem is segregation in a silo. This is usually horizontal segregation. This means that the composition at the wall is different from the composition in the centre. In some cases vertical segregation may also occur. Now horizontal product layers are created in the silo with a different composition.
To combat segregation in a silo, it is required to determine when the problem occurs first. This may be when the silo is being filled, during discharge or during storage.


Upon filling a silo, the product slides, rolls and falls. The particles have a lot of freedom of movement. As a result, they each tend to follow their own path, which is determined by their specific mass, size and shape. This means that particles with the same characteristics will describe approximately the same trajectory. Equal particles tend to come together, with the result that the mixture segregates. 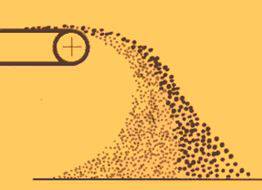 Segregation during filling of a silo
Some factors that play a role in this are:

The greater the drop height, the stronger the segregation. The particles then have more opportunity to follow their individual paths. The outer region of a falling stream of bulk material is particularly sensitive to segregation. A small product flow has a relatively large circumference and will therefore segregate more than a large product flow. In addition, if the product has a horizontal speed, a windsift effect will further increase segregation.

When dumping the solids on a pile, ’avalanches’ will occur from time to time. This refers to the shifting of a section of solids as one mass, more or less. This causes the slope to flatten, and will lead to the effect that many of the larger particles, which were still reasonably in the center, end up on the outside of the pile. This type of segregation has the profile of a Christmas tree in cross section. With a small product flow and therefore a slow, gradual build-up of the slope, ’avalanches’ occur less frequently. 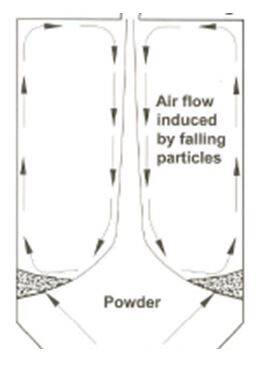 Segregation of fines due to air flow
Fines
If a bulk solid contains very small particles (< 50 microns), segregation may also occur when filling the silo. The air in and around the stream of falling product will move upwards again elsewhere in the silo. This air flow can take fines with it, and deposit them in a certain location. In a silo with central filling, it is known that fines will end up along the wall of the silo.
With pneumatic filling, air circulates above the product. The smallest particles will remain suspended in the air flow as long as transport occurs. When transport stops the fines fall onto the product. This causes a vertical segregation. A filter can reinforce this effect if it is only cleaned after a batch is filled.
Another factor that can play a role in segregation is the aeration of the product. Larger particles can sink or fall deeper into the aerated mass, causing vertical segregation.

In order to prevent segregation during filling, it may be advisable to deposit the product in batches. This is possible by using a buffer with a spring-operated valve.

The horizontal velocity of the product can be slowed down with plates or by using a funnel at the top of the silo. Furthermore, it is possible to dump the product over the entire surface of the silo. This can be done by using several filling openings or pipes, a spreading plate, an inverted cone (Chinaman’s hat) or a rotating chute or pipe (a ’rotary spreader’).
A plate, pyramid or cone that rotates eccentrically also offers the advantage that the product falls off at different distances from the centre of the silo. Another option is a fixed product flow splitter with a number of outlet pipes. In some cases, it is best to introduce the product by means of a (telescopic) discharge pipe. This device deposits the product on the silo floor in an empty silo, and moves upwards following the fill level, thus creating a very small fall height, and minimum horizontal speeds. But this equipment is relatively expensive, so therefore usually only interesting for breakage-sensitive products.

Avoiding segregation when filling a silo


When the product is completely at rest in storage, segregation will not occur. However, it is possible that the product is still ’working’ in storage. It may settle and, especially under the influence of de-aeration and vibration, de-mixing may occur. Particles in aerated powders in particular can have sufficient freedom of movement to cause segregation. Vibrations can also provide this room for movement. Strong vibrations can even cause a kind of aeration, in which case segregation is likely, especially when fines are present.


During discharge of a silo segregation, de-mixing can occur, because of different sections flow out at different velocities. But in some cases during discharge the opposite can occur; when segregation as a result of filling, is counteracted during discharge. Hopper designs exist where mixing of the silo contents occurs, but in most cases the product has to be rather free flowing for a good result.

In a core flow silo the product in the centre flows out faster then the product along the wall. This means that the pile created during filling will disappear during discharge. This may result in re-mixing of the contents of the silo, that had been de-mixed. Disadvantage of this “solution” is that only a small part of the silo contents can be used. And it may not work at all, because the core flow pattern itself may cause segregation. In a silo with a homogeneously mixed product, core flow will cause segregation, especially if there are long slopes.

In general, it is best to empty a silo in a mass flow. Not only because of the ’first in first out’ principle, but also in regard to preventing segregation. After all, with mass flow, all particles move down evenly and at the same speed. To change core flow into mass flow, several options are possible:
With mass flow, the fraction at the wall of the funnel of a silo will mix with the fraction in the middle of the silo. In this way, horizontal segregation occurring during filling is (largely) cancelled out. Only when the silo runs empty, this is no longer the case: now product from the centre flows out faster.
Obviously, mass flow will not counteract vertical segregation.

For a product to be able to flow, dilatation is required; particles need to get room to be able to move in relation to each other. For fine powders, this creates a negative pressure, which is counteracted by an air flow opposite to the direction of the product flow. It is known that with fine products, this counterflowing air can lead to uneven flow behaviour and can cause segregation. However, literature does not indicate how and to what extent.

Segregation during discharge of a silo can be combated by extracting the bulk material from the silo at different points. A well-known technique is the creation of several outlets from which the product is led to a collection point below the silo. It is also possible to install pipes in the silo, which lead the product from various areas to the outlet opening.
In this way, the product flow is composed of various areas within the silo and the product is in fact remixed. In order to ensure that the product meets the specifications again, it is important to know how and to what extent the mass in the silo is segregated. Furthermore, the product must flow freely; no blockages may occur.

BSE, Bulk Solids Engineering
BSE designs reliable installations for bulk solids on the basis of the characteristics of the product. Our work consists of: * Measurement of bulk solid properties for various applications. * Design of silos and transport equipment based on product characteristics. * Advice concerning bulk solids and flow problems, Measurement of product properties BSE has an own laboratory, where relevant properties of the bulk solid, such as internal friction, wall friction, permeability, etc. can be measured. The Jenike shear cell is the most important tester in this respect. Design of bulk installations Based on measured properties bulk installations can be designed with greater dependability. The design of bulk installations is based on product characteristics and applicable standards. Trouble-shooting, consulting Advice is related to flow problems, arching or bridging in the silo, product degradation, irregular flow, silo quaking or shaking, etc
Last update: 02.12.2021

Segregation mechanisms: the basics of de-mixing
Segregation or de-mixing is the difference in composition of several samples of one bulk material. This article gives insight in the general influences and aspects of segregation. If samples taken from one batch have a different composition, this is called segregation or de-mixing. The samples may differ on the basis of the components present (different products) or the fractions present (different particle sizes). Segregation means that the properties of a batch of bulk material are no longer constant at every location, resulting in a loss of quality. Combating segregation involves many aspects. by: ir. P.J. van der Kooi This article deals with general influences and aspects of segregation. The second article in this series deals with the aspects specifically related to storage and flow in the silo. Product properties and segregation Global distinction In mixtures of identical particles, by definition, no segregation can occur. De-mixing is a consequence of the difference in properties of the various components or fractions in a mixture. It can be caused by various mechanisms, in which the process also plays an important role.
02.09.2021  |  201x  |  Specialist article  | 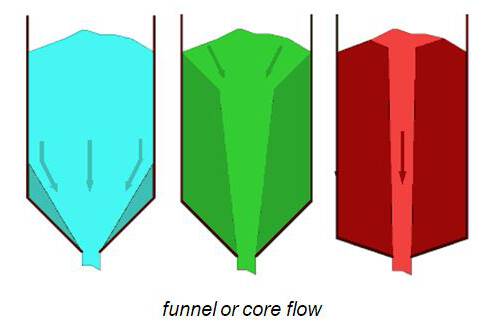 Silo design: avoiding flow problems through adequate design
Avoid silo problems, such as bridging, funnel flow, ratholing, arching, segregation and product decay. Silo design for gravity flow; most economic. To avoid problems in silos concerning flow, product ageing or decay, silo design is necessary. The design of a silo is based on the most economical case: gravity flow. Wall friction, internal friction and bridging properties determine the applicable hopper angle and opening diameter. In some cases through the design procedure it is found that a "simple" silo is not possible. This however saves a lot of work and costs. [IMG01**R45**] INTRODUCTION To prevent flow problems in a silo, proper silo design is necessary. The most obvious (and the most economical) way of storing bulk solids is in a silo with gravity flow. In this case the silo consists of a cylindrical or rectangular part with a hopper. The hopper lets the product converge to the opening. This simple fact is the direct cause of most problems, such as: unsteady flow, segregation, remaining product, ageing or decay of the product, shaking or quaking of the silo, flooding, or: flow does not occur at
27.11.2020  |  1188x  |  Specialist article  |