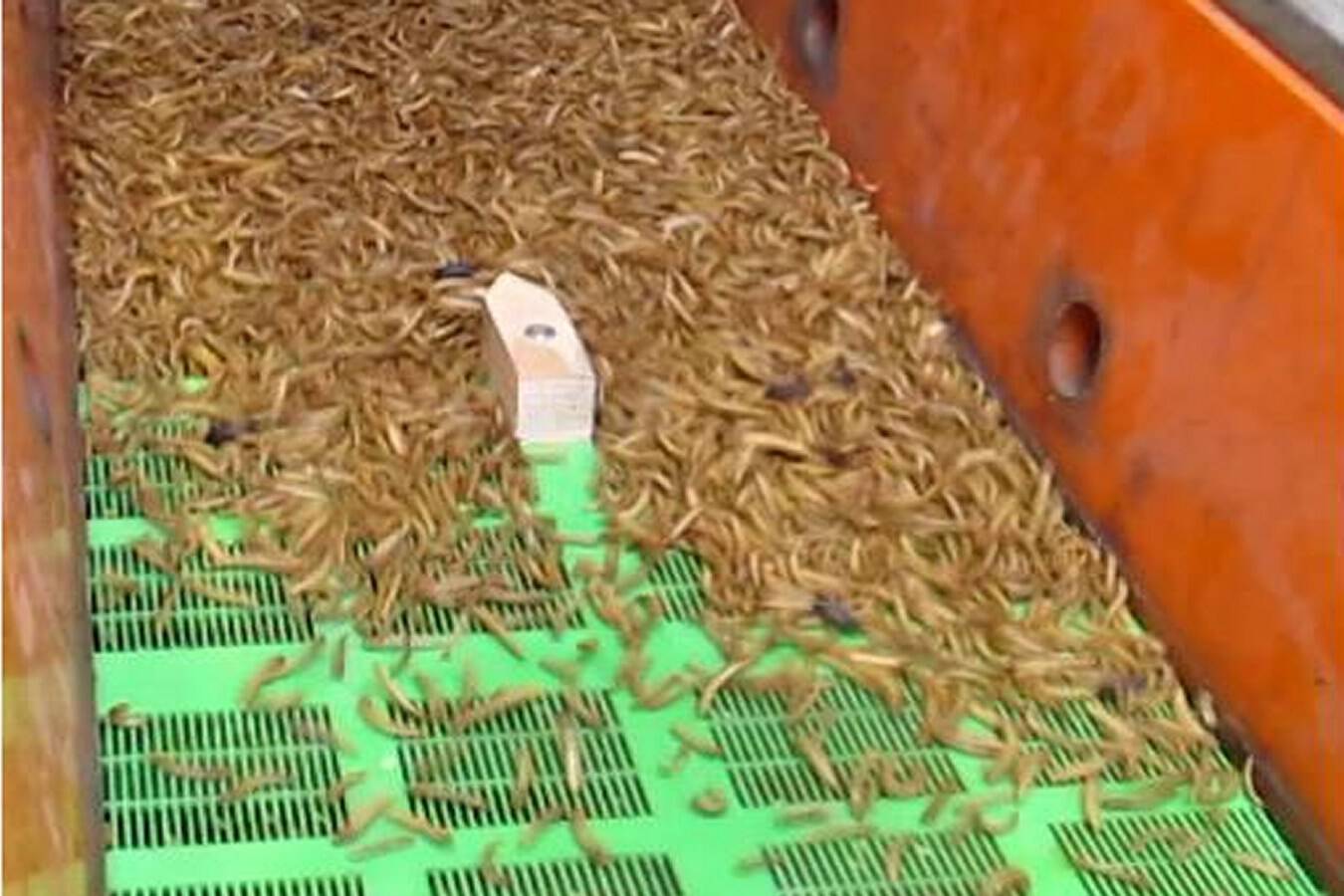 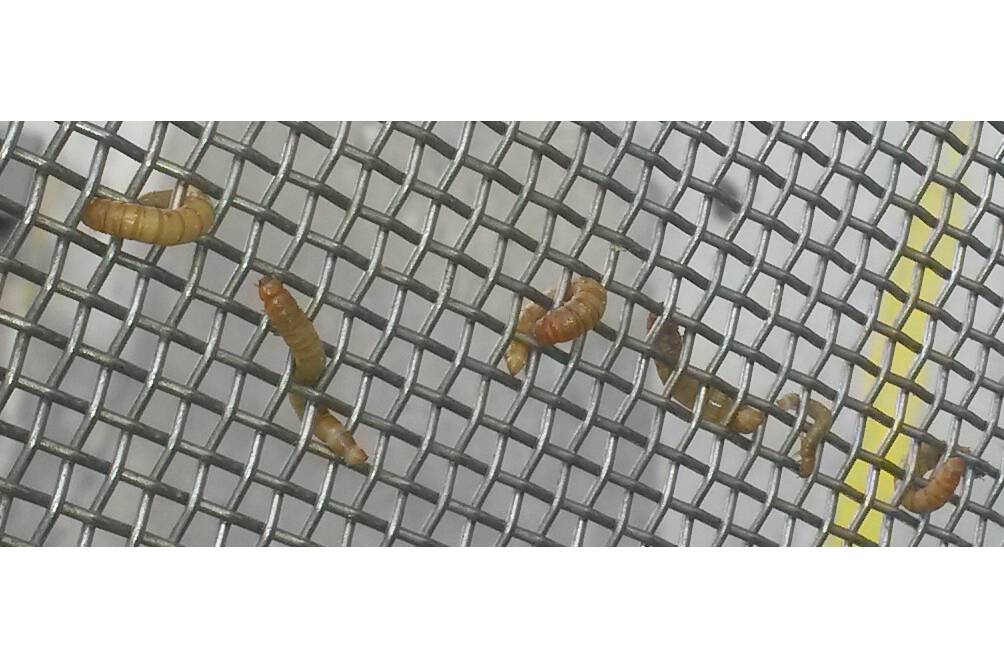 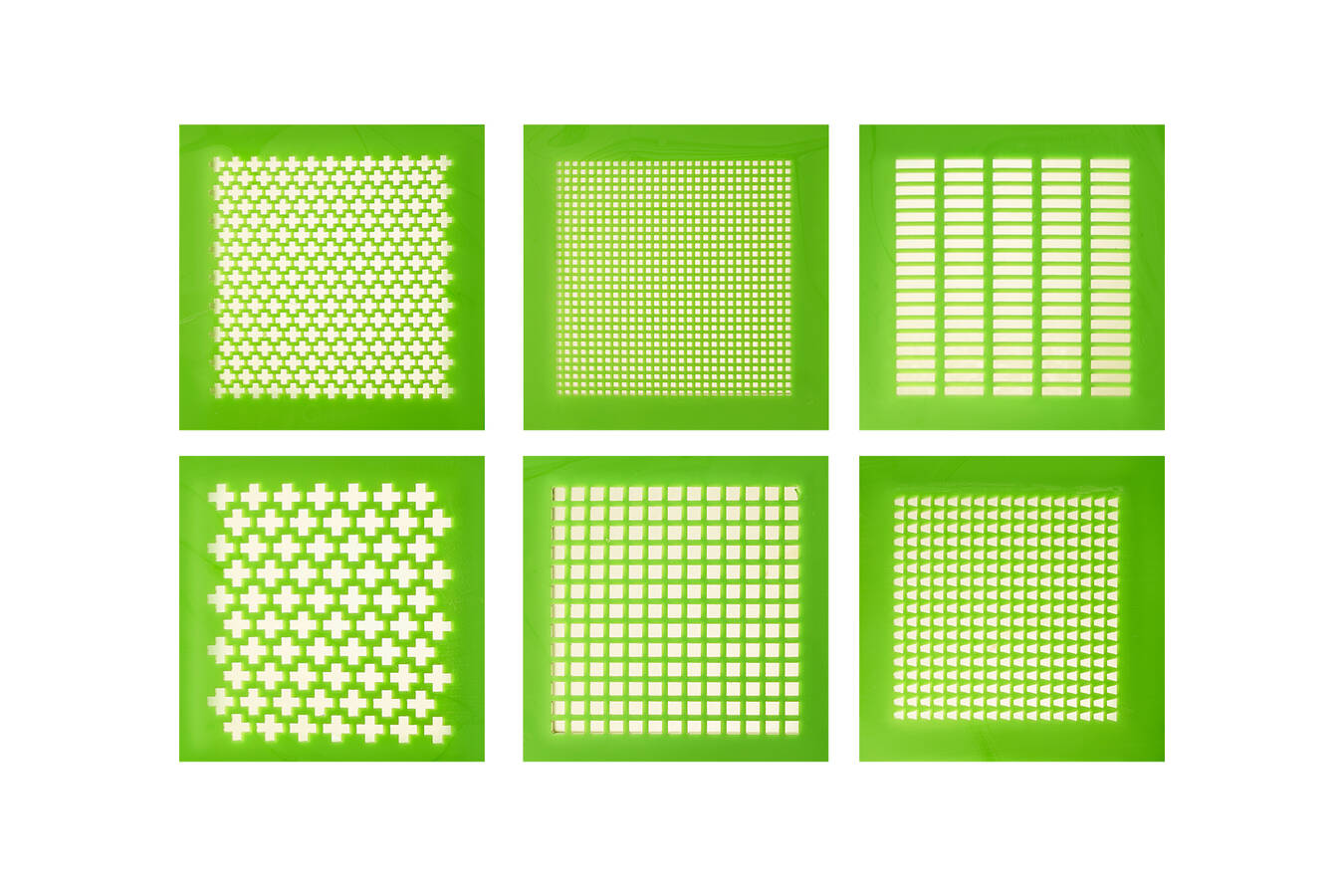 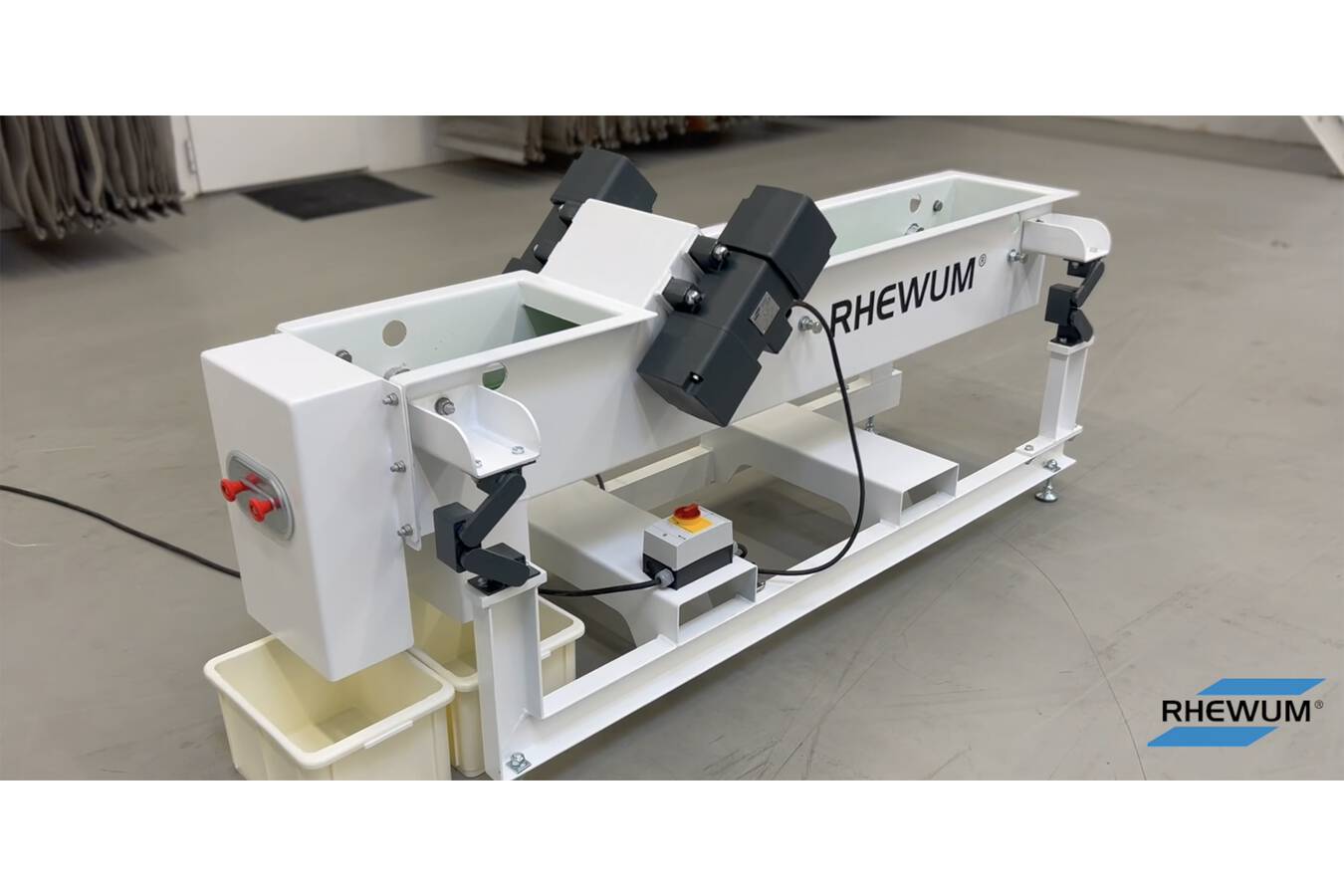 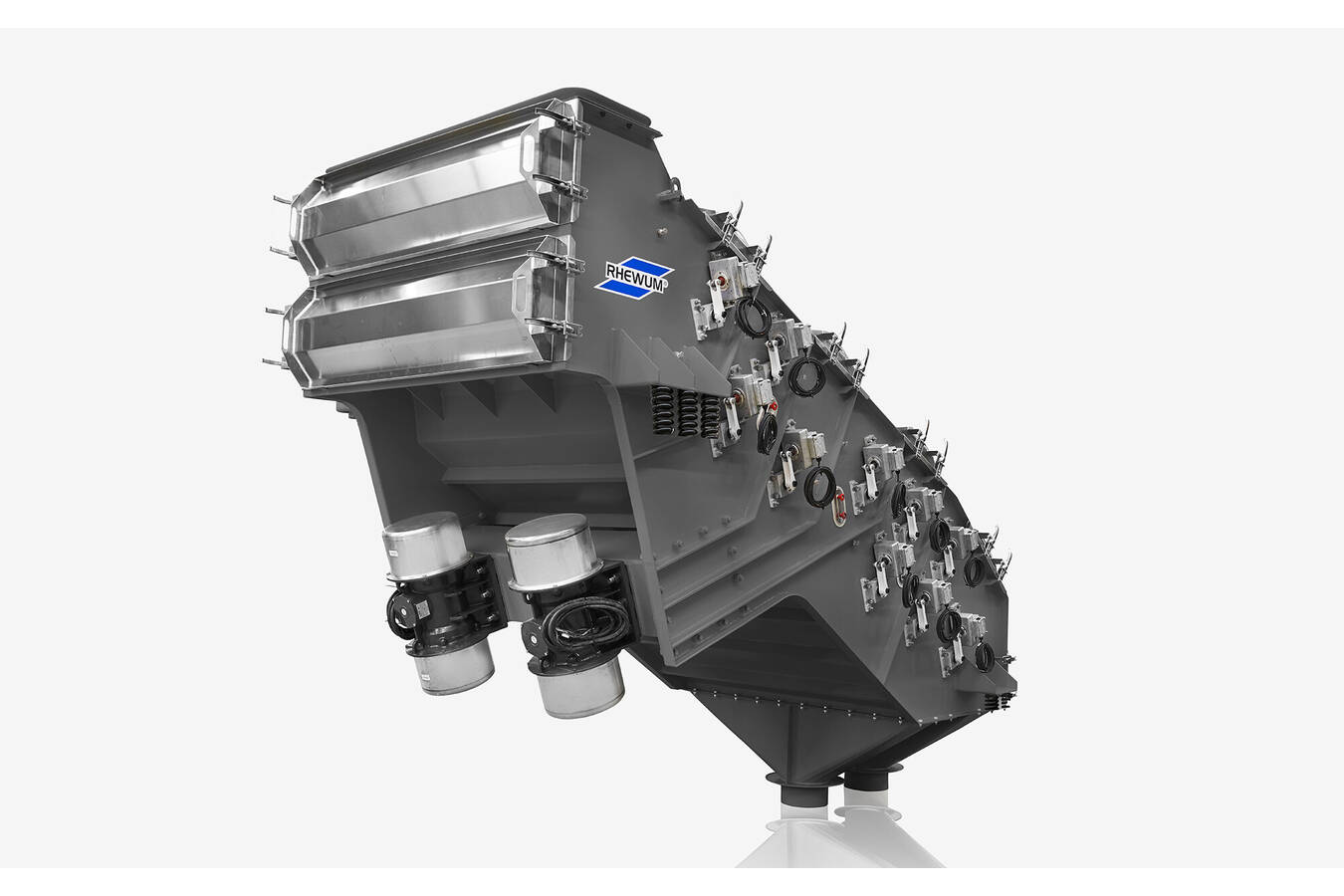 Insects such as buffalo worms and mealworms are a sought-after source of protein as sustainable feed as well as for a climate-friendly diet. RHEWUM has the technology for gentle sieving of live larvae on an industrial scale.
Like many other insects, buffalo and mealworms are a high-quality source of animal protein. Buffalo worms are the larvae of the glossy grain mould beetle and grow to about 7 to 11 millimetres in length [1].

Flourworms are the larvae of the flour beetle and grow considerably larger than buffalo worms, reaching up to 40 millimetres. Both are larvae of the black beetle family and are not worms in the true sense, as they each have three pairs of legs. Nevertheless, for the sake of simplicity, the buffalo and mealworms are referred to here synonymously as larvae and worms.

Compared to other farm animals, the breeding and keeping of buffalo and mealworms is much more climate-friendly, which means that worms are becoming increasingly important as a component of a sustainable diet. For each kilogram of edible protein from insect larvae, a similar amount of energy is required as for each kilogram of protein from milk, chicken, pork or beef, but much less land is needed. In addition, the breeding and processing of insects leads to significantly lower greenhouse gas emissions. [2]

The protein is currently primarily of interest as an alternative to fish protein for use as animal feed. Fish farms in natural waters and seas are a serious problem for the aquacultures there. Excretions over-fertilise the waters and the immense density of fish in a small space cannot guarantee species-appropriate husbandry and breeding. [3] The pollution of the seas by dilapidated barriers, nets and heavy machinery is another problem. The EU is therefore heavily promoting insect farms for the use of the proteins extracted from the larvae as a novel foodstuff as well as animal feed [4].

In vertical farms, the worms grow from egg to larvae. Gently separating the adult worms from the food substrate as well as from the juveniles is a laborious step, as the animals must not be squashed or subjected to excessive acceleration. The adult worms are partly used for reproduction. Excessive stress could injure the larvae and lead to increased mortality, which in turn would reduce the efficiency of the entire rearing process. Furthermore, the elongated shape of the worms and their mobility make them more difficult to screen than classical bulk materials. Their six clawed legs allow them to cling to sieve cloth, which makes efficient sifting even more difficult.

In cooperation with scientific experts for the needs of living larvae, RHEWUM has developed a process that solves these challenges efficiently and in a species-appropriate manner. The new screening machines, specially developed for use on mealworm farms, have a directly excited screen mesh or special polypanel® screen linings made of polyurethane, depending on the classification level.

For the classification of the larvae into different fractions, a new type of screening machine was specially developed that combines elements of the existing RHEflex and RHEstack technologies with the use of polypanel®. An oscillating frame equipped with two unbalanced motors sets the screening machine into a defined linear oscillation of a few millimetres. A low amplitude ensures that the larvae are not thrown excessively high and far in order to ensure a gentle impact on the screen lining and to give the worms as many chances as possible to pass through one of the screen meshes. The meshes can be individually adapted to the size and shape of the larvae in the polypanel® screen linings used. Classic square and rectangular meshes in longitudinal or transverse direction as well as special shapes are possible.

In several steps, mealworms are gently separated from the food substrate on the newly developed RHEWUM RHEflex SL and classified into four different fractions. Pupated larvae are sorted out on the uppermost screen deck and returned to the vertical farm, where they shed their skin after metamorphosis into beetles. The beetles are used for reproduction and lay eggs that grow into new larvae. The larger larvae that pass the first screen deck are also sent for rearing. The smaller larvae, which also pass the second screen deck, are taken to further processing as the main product in order to obtain protein and oil from them. Substrate, e.g. flour or bran, which is smaller than the mealworms, also passes through the lowest screen deck together with the excretions of the larvae - called frass. The screen decks of the RHEflex SL are modularly constructed with specially manufactured polypanel® elements. If required, the screen decks can be easily and safely removed individually for each screen deck. It is not necessary to remove the higher screen decks to reach lower ones, as the panels can be pulled out to the rear. Due to the modular design, a panel is a maximum of one metre long, so that no large space is required for maintenance.

Further screening lines with the RHEWUM RHEsonox and its directly excited screen mesh separate by-products from the substrate in several stages for further processing or reuse. Frass and substrate can be efficiently separated by direct excitation at an oscillation frequency of 50 Hz. By using stainless steel meshes for the non-living fractions, significantly higher throughputs can be achieved, as wire meshes have a much higher open screening area than PU linings and can also be produced with finer meshes. The screen cloths are tensioned longitudinally and are kept under constant tension over the entire screen width by up to four disc spring assemblies. This means that only a maximum of four nuts per mesh need to be loosened. Changing a screen fabric thus takes only 5 to 10 minutes and can also be carried out individually in each screen deck on this machine type. Likewise, the automatic cleaning cycle of the screen cloths ensures a constantly high throughput due to the electromagnetic oscillating heads developed and manufactured by RHEWUM. The amplitude of the vibrating heads can be individually adjusted in each screen deck and even on the inlet and outlet side to optimally adapt the screening process to the respective product. The large number of small drives ensures a high level of production reliability at all times. If one of these drives fails, the machine can continue to run without any problems. The screened, highly pure substrate can be reused in the rearing process and does not have to be replaced. The obtained frass can be used as natural fertiliser. This results in a closed cycle without waste products. Depending on the requirements, agglomerates or eggs from substrate and frass can also be separated on further, higher screening decks. This always depends on the type of substrate used as well as the percentage composition and can be tested in RHEWUM’s own pilot plant. In this way, RHEWUM can provide the best possible constellation of screening technology for all screening tasks.

Both the RHEWUM RHEflex SL and the RHEsonox can be manufactured from either stainless steel or mild steel with food-grade paint, equipped with FDA-certified expansion joints and designed to be ATEX-compliant to safely avoid dust explosions. Both machines can be individually adapted to the required cut-offs and throughput rates. Thus, this gentle and at the same time highly efficient technology is ideally suited for use in both large and small mealworm farms.

In this way, RHEWUM not only contributes to animal welfare, but also indirectly to improving the global food situation and to more sustainability by supporting a climate-friendly alternative to the meat industry.

RHEWUM GmbH
While others are just screening, we are seeing the big picture. Since its foundation RHEWUM has always been looking for the perfect solution. As the leading company in the field of industrial sieving technology we do not just provide screening machines, but the optimal separation of bulk materials that is perfectly tailored to your needs. We can achieve this through customized technology that offers unrivaled reliability with the highest service and product quality.
Last update: 13.12.2022 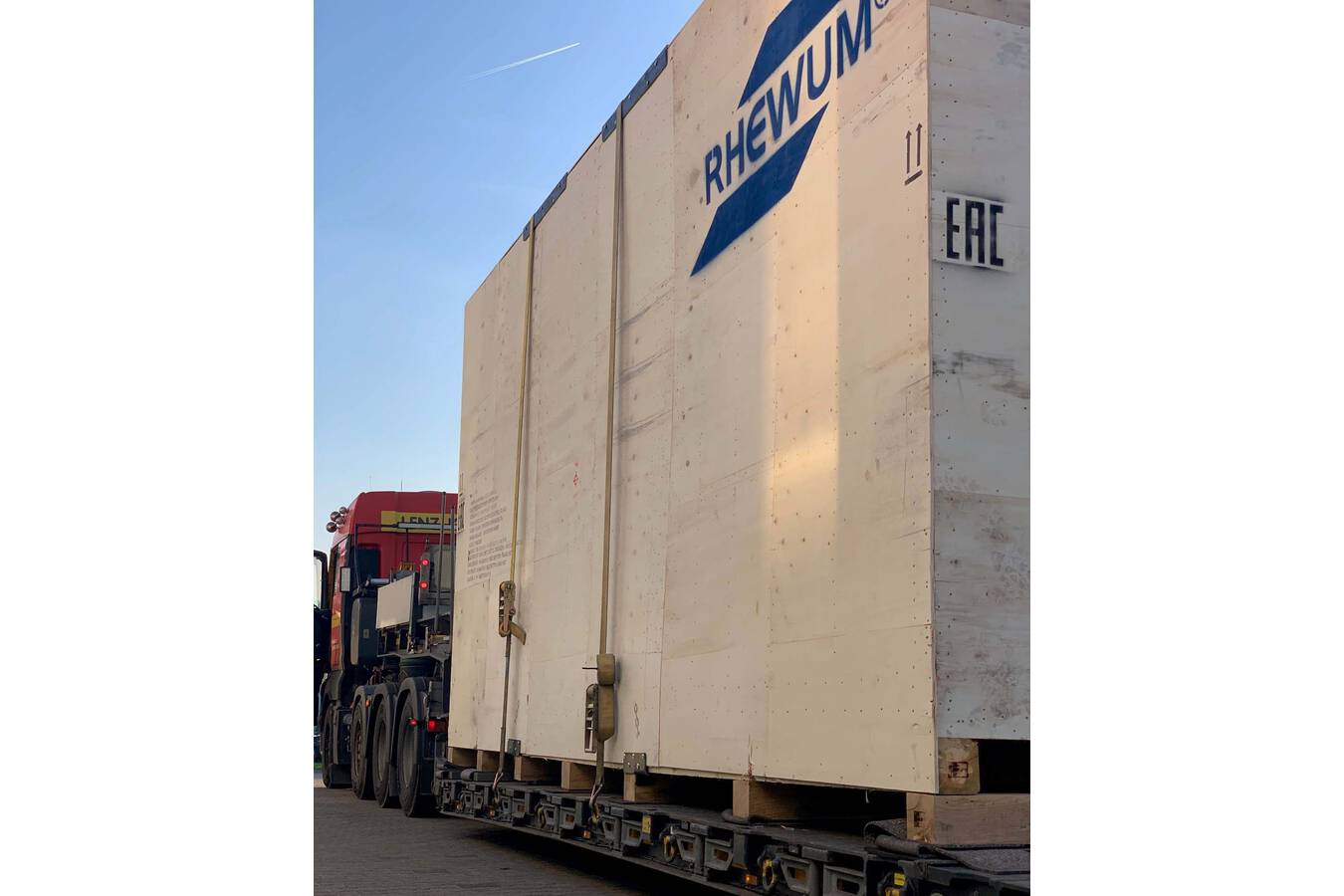 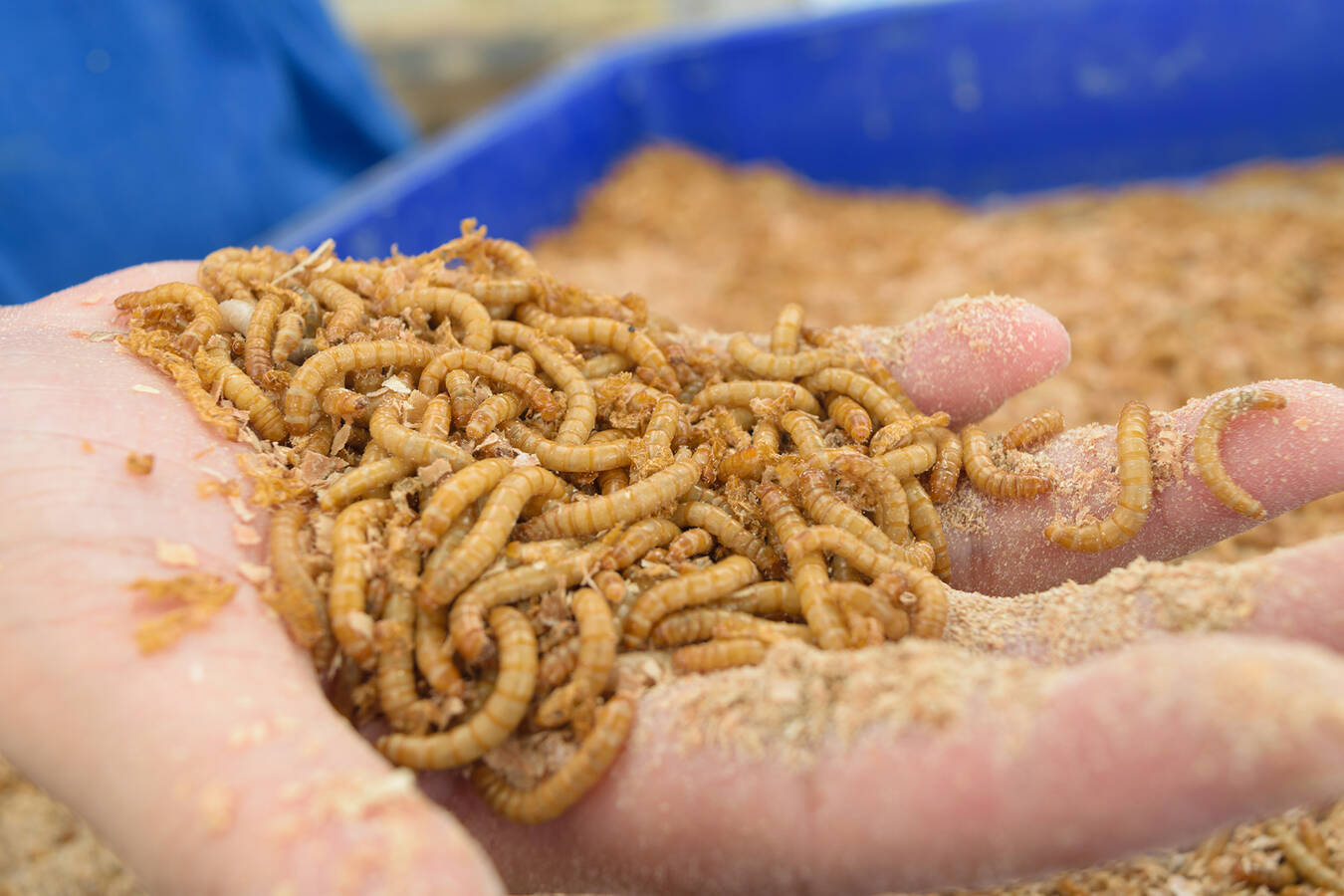 Flat screens
Flat screens
Up to date information and background information about Flat screens, and companies active in this field. Most information is supplied by companies, so you are sure this info is relevant and practical.
PORTALS
BulkSolids-Portal Schuettgut-Portal Recycling-Portal
Related
Bulkgids.nl
SIGN UP FOR OUR NEWSLETTER
Newsletter archive
Service and contact
ContactDisclaimerPrivacyAdvertising
FOLLOW US
Linked