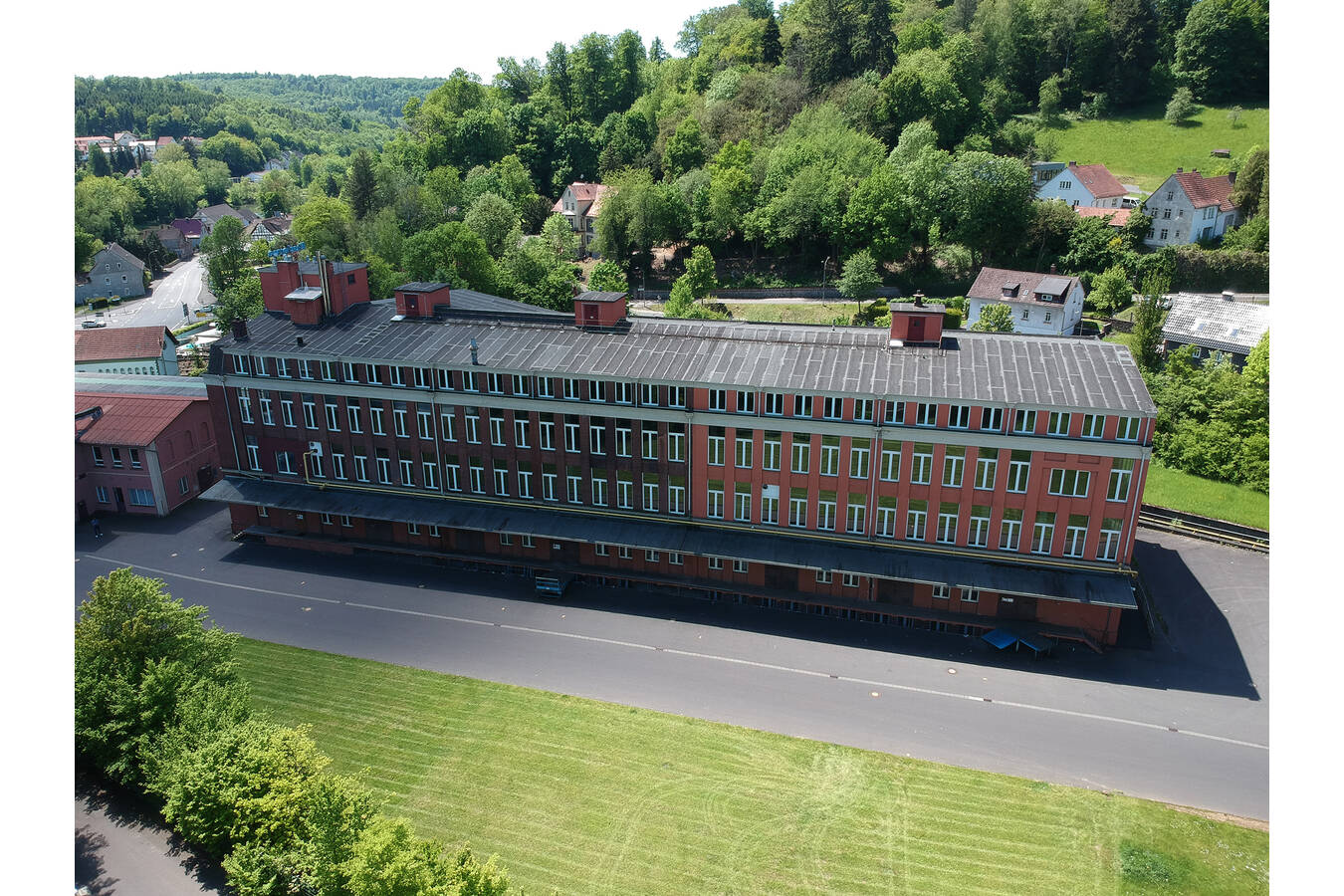 With the acquisition of the Buderus building, the company A. Ebbecke expands Verfahrenstechnik AG in the Wetterau.
A decisive turning point has been achieved with the establishment of an industrial company in Buderus Park. The Wetterau was able to convince with a mix of location factors and the suitable building.

With the acquisition of the Buderus building, the company A. Ebbecke expands Verfahrenstechnik AG in the Wetterau. A key reason for the choice of location was the structure of the industrial monument, which perfectly meets the company’s requirements. “In Hirzenhain we are going to build plants for spray drying and special processes”, explains Axel Ebbecke. Such installations required high ceilings and high ceiling loads, both of which are provided by the building.

The wooded surroundings are another plus point. “A lot of air is sucked in for production, agriculture in the vicinity could contaminate the air via germs”, explains the entrepreneur.
In the production halls of the industrial company, headquartered in Bruchköbel, powders and granules pass through a wide variety of processing stages; it is screened, ground, mixed, liquefied, dried or solidified.

Major customers such as BASF, Henkel or Unilever supply the precursors, which are used as chemical end products for detergents, cosmetics or pharmaceuticals on the more than 350 machines developed mostly in-house. The outsourcing of these production steps saves industrial customers own large investments in process technology. Pilot projects are also off the line at Ebbecke. “We test innovative products for marketability, and for some customers these products have led to a high market share.

Another pillar is the food industry: With peeled wheat grains under the product name Biograin, Ebbecke presents an innovative novelty. Only the outer shell of the grain, consisting of technically inferior cellulose, is peeled off. The whole grain is preserved. “All pollutants such as germs, moulds, mycotoxins or pesticides can be almost completely removed”, the 49-year-old points out. A new application for this has already emerged in the animal feed sector: Customers order the feed for horse studs from Ebbecke AG.

Conveyor pots for buildings and technologies

A. Ebbecke Verfahrenstechnik AG is a growing, imaginative company. Again and again, the graduate engineer and businessman Ebbecke and his 110 employees are working on new processes and techniques.

In total, the company processes more than 800 products. In addition to production and administration in Bruchköbel, another location is located in nearby Schöneck. At the previous locations, however, the expansion plans at Axel Ebbecke ran into limits. The Wetterau has also taken it by rural structure. “Production in nature is characterized by sustainability. This will be a defining motive for future locations in many industries. We are creating interesting jobs locally, which is sustainable. ” Around 40 employees will be employed there when production starts in about half a year.

The spray drying plants in Hirzenhain will comprise seven and nine-metre high internal towers. The floor plan and high ceilings of the building are ideal for this: “The individual plants can be distinguished very well from each other. This is important in terms of hygiene standards”, explains the CEO.
Incentives for private investors to invest in such regions are also offered by various support programmes. “In addition to the structural support, the technological support is also interesting”, explains Kai-Uwe Domes, Managing Director of the business development department of Wetteraukreis. He and his managing director colleague Klaus Karger have been closely involved in the establishment of Hesse’s most important industrial monument from the very beginning. “When such an industrial monument is revitalized with new technologies, it has an enormous impact on the entire region”, Domes explains. So far, BFG Feinguss Hessen and the Schwab decoration studio are located in the immediate vicinity.

One of the smallest municipalities in the Wetteraukreis with a long tradition of iron casting will now develop into a hub for particle design. A competence centre for spray drying is also envisaged in the rooms.

It is intended to create a platform for exchange with the universities in Fulda, Giessen and Friedberg. “Start-ups are invited to use our spray towers for their research or production”, says Ebbecke about planned collaborations. “We are also happy to provide you with office space or commercial space. ” There is no lack of public authorities. The mayor of Hirzenhain will also have his new office in the industrial monument.

A. Ebbecke Verfahrenstechnik AG
A. Ebbecke Verfahrenstechnik: Sustainable and Innovative Experience, Know-how and Innovations are the basis for modern proces engineering The increasingly flexible requirements, combined with the continuously decreasing market cycle terms, demand for highly flexible and reactive processes for making specific products for our clientele. In order to support our customers in this dynamic market we provide the possibility to outsource, thus variabilizing costs and creating short term capacities and sample lot availability. Investment decisions and planning cycles often require huge amounts of time, hence extending the time-to-market, not allowing for an in-time market introduction. A. Ebbecke Verfahrenstechnik AG will gladly support you in this matter. With our diverse capacities and specific expertise concerning the economic and technical framework, we offer the high flexibility and swift availability our customers are accustomed to. Through cost variabilization, the cost foundation is clear. Meaning: hidden costs, subsequent cost increases or unavailable capacities are risk factors that can be ruled out in advance. By providing the full supply-chain, we offer a comprehensive service allowing short-term market introduction of new products. A. Ebbecke Verfahrenstechnik AG is specialized in developing and accompanying scale-up processes with its customers, leading to investments by A. Ebbecke Verfahrenstechnik AG within a manageable timeframe of 6 – 12 months. Our main objective in doing so is agreeing on long-term contracts with our customers. Investments made are then usually returned over the contract term. The investment risk is split between the parties using an investment formula. Merely 50 % of the overall investment are added to the product cost. The remaining 50% are covered by A. Ebbecke Verfahrenstechnik AG. In exchange the machinery remains the company’s property. This allows a clear cost allocation for maintenance, repairs and replacement, therefore all additional or hidden costs are minimized or fully eliminated.
Last update: 25.02.2021
PORTALS
BulkSolids-Portal Schuettgut-Portal Recycling-Portal
Related
Bulkgids.nl
SIGN UP FOR OUR NEWSLETTER
Newsletter archive
Service and contact
ContactDisclaimerPrivacyAdvertising