Collaborative R&D project between Van Beek and PeelPioneers results in revolutionary Soft Squeezer to obtain valuable raw materials from orange peels
PeelPioneers, the ultimate 21st century fruit and vegetable waste collector (FVW collector) has, together with Van Beek Schroeftransport, developed the Soft Squeezer. This revolutionary peel squeezer conveyor takes the circular economy to the next level, and offers insights into the future processing of biomass streams. “Over 60 per cent of the mass of an orange’s peel used to end up as incineration waste, which was a real shame.”, says Sytze van Stempvoort, chief FVW collector and one of the three founders of PeelPioneers.

Since it was founded in 2017, the Den Bosch-based scale-up has been collecting around 45,000 kilos of orange peels per day from the hospitality and retail sectors. Until recently, the peels were no more than the useless residue of freshly squeezed orange juice. Today, it’s a sought-after green waste stream, converted into functional food fibre for, among other things, food, cosmetics and cleaning products. “As a consumer, you don’t realise how much of this kind of pulp is in circulation, and that you can really put it to good use. We offer local raw materials that are produced sustainably, that do not come from faraway places, and that radiate quality and reliability,” Van Stempvoort explains. He describes the start-up as a prime example of a circular economy, and a global pioneer in circular solutions for orange peels.

When the machine they required did not appear to exist at a time when there was an increasing demand for cold-pressed oil and highly concentrated orange flavouring, the company happened to cross paths with Van Beek Schroeftransport. Van Stempvoort: “Hard squeezing has the disadvantage that the naturally occurring pectin (a natural binding agent in the cell walls of plants and fruit, such as in an orange peel, ed.) is lost. This not only complicates the oil-extraction process, but also has a negative effect on the oil and therefore its quality. This makes it very important that there is a fine, precarious balance during the squeezing process.” The two innovation-driven parties joined forces for a challenging R&D collaborative project aimed at the development and construction of an as yet non-existent Soft Squeezer, to match the expectations and requirements of PeelPioneers: a peel squeezer conveyor for the first pressing and crushing of the peels. A number of other relevant factors needed to be taken into account. For example, there was a high risk of bridging in a bunker, because orange peels accumulate due to their unusual shape. There had to be an increase in the buffer capacity, the peel was not allowed to be pulped and, due to the amount of natural sugars in the orange peel, cleanability was a major factor.

“A scale-up will always give rise to a unique demand”, says Joram van der Heijden, who was actively involved in the project as a sales engineer at Van Beek Schroeftransport. “Thinking up something together that does not yet exist provides a great deal of inspiration, creativity and ultimately new ideas for other projects. It also provides opportunities for a customised screw conveyor in a market that is new to us.” In common with PeelPioneers, the Drunen-based screw conveyor and machine manufacturer believes in partnerships in which joint focus on innovation is key. All this is supported by a group of people with the proper knowledge, perseverance and courage. Result? A 2.5 metre long Soft Squeezer and two stainless steel bunkers measuring 25 and 35 cubic metres respectively, to achieve two separate production flows. Orange peels collected from supermarkets, where visitors can make their own freshly squeezed orange juice, are disposed of into rubbish bags. The peels are collected together with the bags, and this requires a different processing procedure. After all, how do you buffer bags filled with peels, and how do you prevent them from becoming jammed? Van der Heijden: “Normally, you would convey a loose product from the storage bunker, however, now we had to deal with peels in bin bags. We solved the problem by placing a larger 800 millimetre screw feeder at the base of the bunker. This creates more space for the bags and prevents the system from jamming. The screw feeder then slowly pulls the bags out of the bunker.”

The adaptable design of the peel squeezer conveyor features, in addition to a double-walled housing, a strainer for maximum discharge of both orange juice and contaminated cleaning liquid. For this reason, the double-walled housing is also fitted with a hatch on top to allow for easy deep-cleaning in order to prevent microbiological contamination of the interior of the screw system. The bunkers are also equipped with a large access hatch, where safety is paramount. “To open it, you need the same key you use to activate the motor of the screw feeder. The cleaner carries the key, thereby preventing the motor from being activated accidentally”, explains Van der Heijden. PeelPioneers also wanted to increase the production capacity, which proved to be quite a challenge given the product that was to be conveyed. The behaviour of orange peels is difficult to predict because of bridging. For this reason, the Soft Squeezer has been developed in such a way that the design can be easily adapted, and essential parts can be quickly replaced. According to Van der Heijden, this is indicative of the relationship of trust and transparent communication between PeelPioneers and Van Beek.

In the opinion of both parties, this is has been a hugely successful collaborative R&D project, which offers prospects for further biomass streams. But for now, PeelPioneers is both literally and figuratively busy extracting as much raw material as possible from orange peels. “We are constantly innovating, we have a tremendous can-do mentality, and are researching other residual streams around the world to which we can apply our knowledge and expertise. Before 2025, we want to open branches in the United Kingdom, France, Germany and Spain,” according to Van Stempvoort.

Van Beek
The organization’s core activities consist of designing and manufacturing screw conveyors and bulk truck loading equipment.They are all designed to process bulk material, like powders, grains, flakes, granulate, paste etc. etc. Van Beek is characterized by offering total solutions, superb quality and service. About 50 enthusiastic, driven and highly involved employees are helping to raise the company to a higher level. History Van Beek’s history goes back to 1939. Since then Van Beek has developed to a leading company of the Benelux market. More than 50% of the sales head directly or indirectly abroad, which means that the products must be of an absolute superior quality in order to prevent any disruptions at its customers.
Last update: 10.10.2022 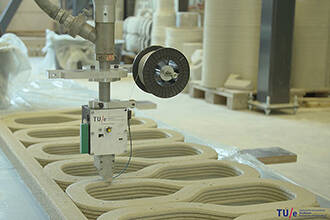 Van Beek screw conveyor component of revolutionary 3D concrete printer
Architect Zeeshan Yunus Ahmed makes grateful use of Van Beek’s knowhow in his research at the TU/e. The Technical University of Eindhoven (TU/e) has been in the news a lot in recent years with the 3D printing of concrete. Together with the construction industry, the university wants to develop knowhow to print recyclable concrete products. For example in 2017 it rolled out a new cycle bridge from the revolutionary 3D concrete printer and last summer the longest concrete 3D printed pedestrian bridge (28 metres) in the world was installed in Nijmegen. In the background Zeeshan Yunus Ahmed, a researcher at the TU/e, is working on the next step: the 3D printing of reinforced concrete. To develop a prototype Ahmed’s research team opted for a screw conveyor and the knowhow of Van Beek. Reinforcing concrete Concrete is a brittle material that can take a lot of compressive force, but not much tensile force. To prevent cracking, it is therefore important to reinforce concrete
12.05.2020  |  1319x  |  Product news  | 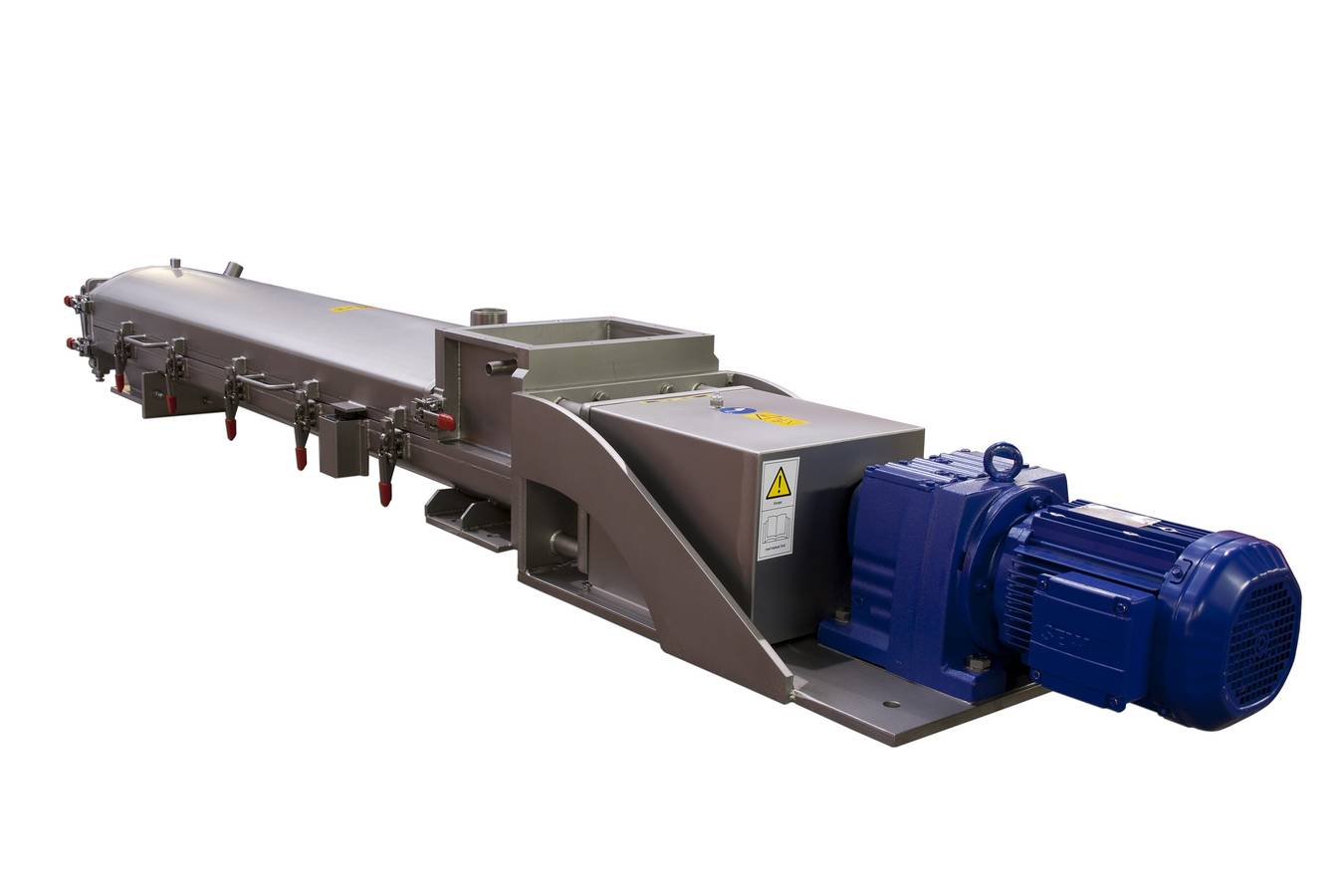 Bühler Group already a satisfied user of Celsimix
for a quarter of a century The Bühler Group from Switzerland has already been the biggest fan of our Celsimix for mixing a wide variety of difficult mixtures for more than 25 years. Bühler is a well-known system integrator that focusses primarily on mechanical and thermal process engineering. The company operates in over 140 countries and has more than 13 thousand employees. “The cooperation is very good and we want to build on this in the future”, says Herr Stöckel Purchasing Manager for the company’s Leingarten site. ‘The design we were looking for’ Bühler came into contact with Van Beek when the company was looking for a way to mix nuts with a ‘binder’, for the production for example of nut bars or filled chocolate bars on behalf of a customer. “It did not feel so much for us like choosing a supplier, as cooperation. The engineers at Van Beek helped us think things through from the start and the result is the optimum technical solution and the design we were looking for”,
14.04.2020  |  1160x  |  Press release  |
PORTALS
BulkSolids-Portal Schuettgut-Portal Recycling-Portal
Related
Bulkgids.nl
SIGN UP FOR OUR NEWSLETTER
Newsletter archive
Service and contact
ContactDisclaimerPrivacyAdvertising
FOLLOW US
Linked